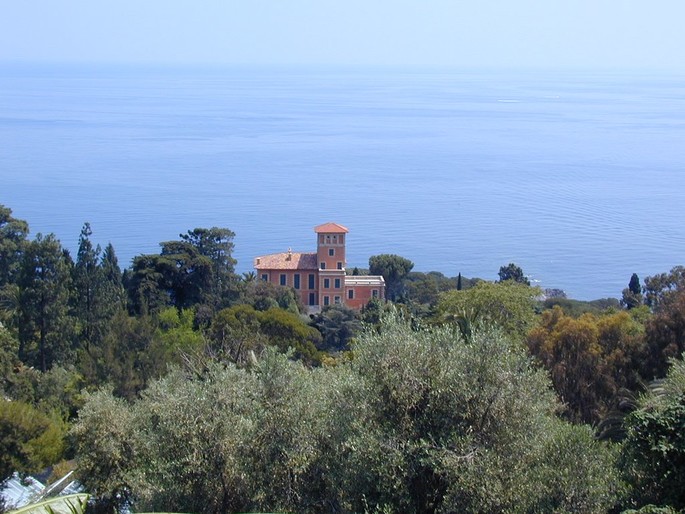 The Hanbury Gardens, located in Ventimiglia's Mortola district (province of Imperia, Italy), stretches over 18 hectares on a promontory of the Mediterranean coast, close to the French border.

As it is typical of the Ligurian coast, the area goes down from the hill to the sea and the landscape seems "English", with irregular paths and romantic, rustic pergolas and patios, and a wonderful view of the sea in the background.

The ancient road Via Julia Augusta crosses the park, but the entrance to the villa is on its upper side.

Under the front porch is a mosaic portraying Marco Polo, created by Salviati in 1888.

At the bottom of the hill, near the sea, there is a semi-flat area with gazebos, shading pines and original Mediterranean plants.

Due to the particular climate (rather early springs and late autumns, long and hot summers), vegetation and flowers last a long season, and some plants even bloom in winter.

History of the Gardens

Sir Thomas Hanbury, who made his fortune with the export of tea in Shanghai, began to build the gardens in 1867, after buying the palace of the Marquis of Ventimiglia and the surrounding land. There he settled the astonishing garden with plants from all over the world. To help him in his project, he called his brother Daniel from England as well as botanists like Ludwig Winter (read also http://www.italyrivieralps.com/de/2014/09/09/read-more/argomenti/itineraries/articolo/bordigheras-itineraries-madonna-della-ruota.html) and Alwin Berger from Germany and many gardeners.

The gardens became soon famous in the whole world. In 1912 they housed already 6,000 different plant species, mostly tropical and subtropical.

As sir Thomas died in 1907, his son Cecil and daughter-in-law Dorothy continued working on his project, but were compelled to abandon it at the outbreak of the Second World War.

The site has been acquired by the Italian government in 1960. Two years later it was entrusted to the International Institute of Ligurian Studies until 1979, and to the University of Genoa in 1987.

The Hanbury Gardens have been declared Regional Park in March 2000 and have been nominated for UNESCO's World Heritage list in 2006. In 2010 the Italian Post Office dedicated the €0,60 stamp to them.

The Gardens are open to the public.

Paths for people with reduced mobility and sensory disabilities

The "Giardini Hanbury for everyone all year round " project was approved and funded by the Local Tourist System (STL) "Riviera dei Fiori".

Near the beach and the little restaurant, a suitable part of the site has been equipped to receive groups of tourists with reduced mobility.

The Gardens are rather flat. An electric vehicle authorised for the transport of people with disabilities will be available to bring visitors to the entrance gate. On prior request, personal drivers and staff will accompany visitors in wheelchairs and people with sensory disabilities to the picnic area.

Along the route there are 5 tactile-panels with descriptions in Italian, English and Braille. The first panel shows a map of the route in relief.

The path is approximately 461 m long.