Splendid itinerary that winds between 1800 and 2100 meters above sea level on an ancient military road. 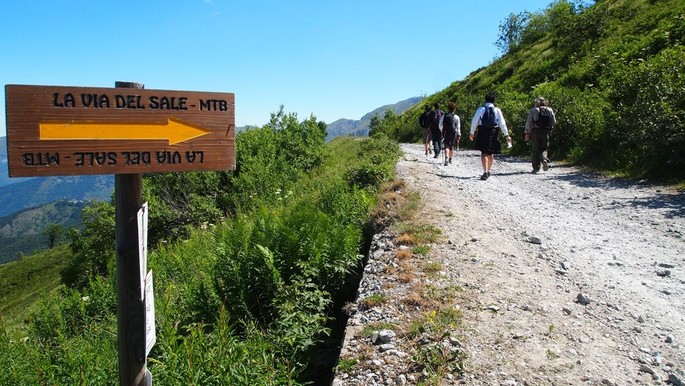 The route of the Via del Sale (from Limone Piemonte to Monesi) is an entirely unpaved road that connects the two countries, has a total length of 39 km and is open to transit during the summer and autumn months. Accessible to hikers and cyclists, the road is also open to motorized vehicles with a toll payment. The route passes through enchanting places such as the picturesque area of ​​the Carsena with its almost lunar landscapes, the uncontaminated environments of the protected areas of the Maritime Alps and the Ligurian Alps Park characterized by a rich biodiversity, the wonderful Bosco delle Navette and the military fortifications of nineteenth century.

The streets of Roa Marenca (from Mondovì to Ormea) were those of the transport of "salt" (necessary to preserve food), once so precious to be sometimes exchanged at the same value of gold! The use of the refrigerator, at the beginning of the twentieth century, has made these streets obsolete, but now they are to be rediscovered, with all the charge, still current, of culture, nature and flavors! 60 km of secondary paved roads between woods and mountains from which you can venture (by bike, motorbike or 4x4) on paths on white roads through some rings.

Now it is possible to discover the routes of the Via del Sale and the Roa Marenca and their variations thanks to the maps made by the ATL del Cuneese. See PDF files hereby, or request your free copy (phone 0171.690217int.1,  iatcuneo@cuneoholiday.com).

Lake St Ana – the only volcanic lake in Europe

Bucharest, from the Middle Ages to today:...

The Romanian blouse – IA - a journey between...