Cocteau will write: "you shouldn't dress the walls, you have to draw on their skin, that's why I treated the frescoes linearly with the few colors that enhance tattoos. Santo Sospir is a tattooed villa ”. 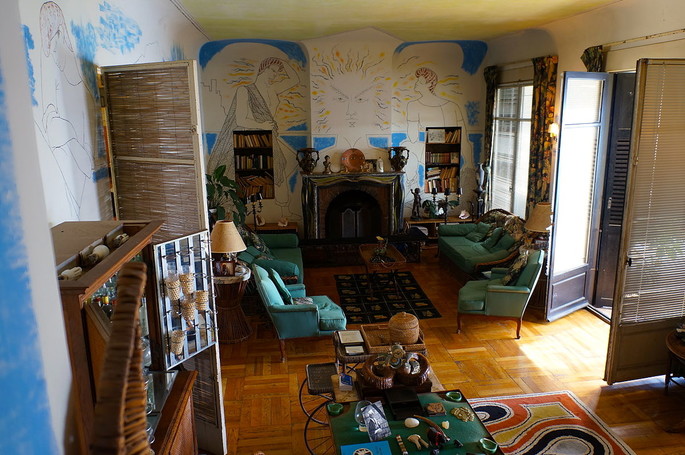 In 1949, the poet Jean Cocteau during the filming of Enfants Terribles, a film made after his famous novel by a very young filmmaker of the time, Jean Pierre Melville, met Francine Weisweiller. Nicole Stéphane (real name Nicole de Rothschild), the main actress of the film, cousin of Alec Weisweiller, introduced the poet to Francine; there was a love at first sight between them. In Spring 1950, after the montage of the Terrible Children, Francine invited Jean Cocteau, as well as her adopted son Edouard Dermit (interpreter of the role of Paul in the film), to come to spend a short week of vacation in his house of St Jean Cap Ferrat overlooking the bay of Villefranche.

Villa Santo Sospir, built shortly after the war, was bought by Alec and Francine in 1946. Used as a holiday home, the walls of the villa had remained empty. A few days after his arrival, Jean Cocteau will say: "I am tired of idleness, I am getting dry ... ". He asked Francine if he could draw the head of Apollo over the living room fireplace with charcoal. Bit by bit, he tattooed frescoes on all the walls of the house. Matisse had told him: "When you decorate a wall you decorate the others, he was right". Cocteau also said: "Picasso opened and closed all the doors, just painting on the doors, that's what I tried to do. But the doors open into the rooms, the rooms have walls and if the doors are painted the walls look empty… ”

All summer 1950, Jean Cocteau worked on ladders, without any prior model. After drawing with charcoal, the poet enhanced his color drawings: an Italian worker prepared colored powders diluted in raw milk. These are called tempera frescoes.

For most of the frescoes, Jean Cocteau was inspired by Greek mythology, with also allusions to the Côte d'Azur: the fishermen of Villefranche and their nets, the sea urchin, the fougasse (bread from Nice)… Two years after finishing the walls of the villa, Jean Cocteau tackles the ceilings. Finding them too white, he colors them in pastel in very soft tones. He then composed two mosaics for the entrance patio: on the threshold, two faces and a snake; on the wall on the left, an Orpheus head. Finally three years later, Jean Cocteau offers Francine, for the wall of the dining room left bare, the Judith and Holopherne tapestry, the pastel which he had executed in 1948 in his house in Milly-la-Forêt.

For years, Jean Cocteau will spend long stays in the villa of Saint-Jean Cap-Ferrat. About this place, he will write "When I worked at Santo Sospir, I became a wall myself and these walls spoke for me". Frescoes, mosaics and tapestries still dress Santo Sospir today, more alive than ever. They marry not only the architecture of the house, but also the moods of its inhabitants. The furniture has also remained the same, so that today's visitors are immersed in the timelessness of the poet.

Shortly after tattooing the Villa Santo Sospir, on the same Côte d'Azur, Jean Cocteau decorated frescoes in the St Pierre chapel in Villefranche which he offered to fishermen, then it was the wedding hall of the town hall of Menton. He also designed a Greek theater for the Mediterranean University Center of Cap d'Ail and a year before his death, Jean Cocteau will execute models for another chapel in Fréjus "Notre Dame de Jerusalem: Domaine de la Tour de Mare". This manual work did not prevent him from writing poems, essays, novels and making his last film: "Orpheus' Testament".

Villa Santo Sospir is, since May 5, 1995, registered in the additional inventory of Historical Monuments. “Picasso, Matisse, Chagall, myself, on this coast where Renoir lived, we tried to overcome the spirit of destruction that dominated the era, we decorated surfaces that men dream of demolishing. Perhaps, the love of our work will protect them from bombs. ”

Romania is the country that everyone should visit...