Marcello is Marcello and that's it ... He has created thousands of works, each of which has its own history linked to the great love for his land; love that prompted him to transform the bed of a stream into a living museum of statues ... 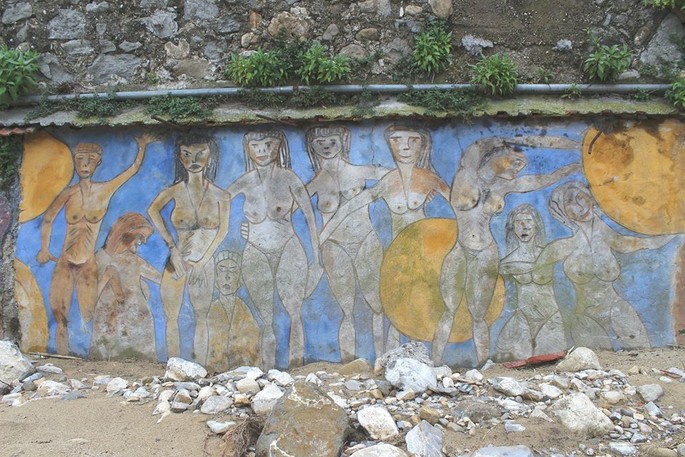 Marcello Cammi was born in Sanremo on April 14, 1912 - from Paolo Cammi and Emma Musi - and died in Bordighera on November 3, 1994. Still a child and orphan of mother, he moved to Bordighera where he began to help his father, a bricklayer, foreman of a small business that he dealt with the processing of cement, in particular with balustrades, vases and other garden furnishings. He was a man of profound humanity; he loved animals, cared for injured ones and, over the years, he had an owl, a fox, an eagle, turtles, pigeons, swans, ducks, dogs and cats. In 1934, going to dance, he met Vittorina, the companion of his life, a woman apparently slender and minute, but with a great temperament, which he married on June 29, 1935. On November 2 of the same year Claudio was born, nicknamed "l 'inzegnè ”, because he was a mechanic and had a passion for engines and motorbikes that he developed for racing. In 1941 he participated in the Russian campaign and was injured in his left hand, with his middle finger amputated. On August 25, 1994, his son died at the age of 59.

Around 1947 he began to create, with concrete, works in imitation wood, benches, tables, balustrades, fences and fish tanks; from 1950 onwards, concrete jars and planters that filled earth, flowers, succulents were offered for sale by placing them on the wall of the Enchanted Garden. In 1956, Maestro Giuseppe Balbo noticed, seeing some of his works, that Marcello, who at the time was a floriculturist, was an instinctive and spontaneous artist of considerable relevance. One day Cammi went to the Balbo Academy to learn the teachings of the master and become a good painter. Balbo saw him and said to him: "I don't want you to come to the Academy to learn, you already know how to paint, do what comes to your mind without listening to others. If you want, come and meet me. " . He invited him to participate in the "Five Bettole" prize that he won, making his expressive originality known to the public.

Self-taught, he was able to freely express himself outside the conventional aesthetic norms and the influences of any school or movement. Although devoid of cultural supports, with his great enthusiasm, the wonder before the world, the continuous desire to do and experiment, he reached a relevant degree of inner maturity, rich in experience and human content, which allowed him to communicate with the observer. Free from any artistic influence, Cammi is considered a naïf even if his primitivism ranges from expressionism to metaphysical, to surreal. It could be included in an area that from Van Gogh and Gauguin reaches Ornèore Metalli, up to Dubuffet's Art Brut - the term "Brut" should not be taken literally since it is not rough, brute, vulgar art, but simply art made outside any type of pre-established artistic convention, in conditions of total freedom and spontaneity with respect to the values ​​of official culture. Marcello said: "Everything I did, both in painting and in sculpture, I did it without worrying about the judgment of others" -. He approaches Van Gogh for his character excesses; to Gauguin for the colors applied on the canvas in an almost uniform way and divided by zone, for the two-dimensionality, the formal synthesis and for the ability to instinctively recognize the high aesthetic value of the arts considered "primitive"; to Metelli for independence from any current expressed through certain ingenuities and disproportions and for having come to art in old age; to Dubuffet's Art Brut for the spontaneous way of expressing himself across-the-board and for having invented a functioning microcosm with a coherent and homogeneous style in its characteristics, highlighting the function of art in the life of those who create who thus becomes primary irreplaceable, magical importance linked to fundamental needs for intervention on reality. The comparison may seem excessive but, while Gauguin matured the belief that the only way out of the existential unease caused by modern life was the escape towards an uncontaminated civilization (Polynesia and Tahiti, where he devoted himself to the study of the indigenous people), Marcello had primitivism within him and managed to externalize it by creating an enchanted garden that represented his experience, or by painting ideal and uncontaminated landscapes.

The compositional simplicity of his works reflects the naturalness, purity and ingenuity of his lifestyle. His favorite themes were: subjects inspired by crucifixion, resistance  and concentration camps; animals (dogs, cats, monkeys, swans, ducks, peacocks, owls, eagles, fish, penguins etc.) and naked women among the plants; Ligurian landscapes, marinas, fishermen, farmers and palm trees always present in his thoughts and protagonists in numerous paintings. He was a man who had strong feelings, attentive and sensitive to the problems of those belonging to the most disadvantaged social classes. A painter capable of representing the life of ordinary people. He painted everywhere, on supports of any material: jute canvas, wood, paper, ceramic, terracotta and nylon, using tempera or oil paints. In his long career he worked a lot, creating a significant number of works - about seven thousand paintings and three thousand sculptures, almost all of them made of concrete, twenty stone heads and five wooden figures, a material he did not particularly like but used to demonstrate his ability. in working any type of matter - in absolute freedom and obeying more feeling than reason.

Some dissertations have been carried out on Marcello Cammi and his garden, numerous films made by Italian and foreign televisions including the BBC, the Soviet TV and in 1992 the film "Ich bin das achte weltwunder" (I am the eighth wonder of the world), by the famous German director Lothar Warneke.

Numerous tourists, mostly French and Germans, stopped on their itinerary in this magical corner of the territory of the City of Palms.