La Merenda Reale Torino is a tradition born in the distant '700 to the court of Savoy to calm the appetite of the nobles in the time that passed between lunch and dinner and after dinner (the royal snack could be served, in fact, between 2.00 and 10.00 pm ). 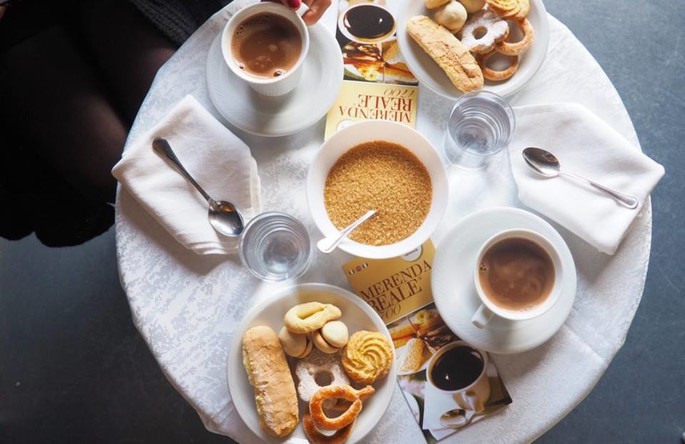 The absolute protagonist of this delicious moment is chocolate, of course (in Turin it could not be otherwise), served together with other delicious delicacies of the Piedmontese tradition.

There are two versions of the Royal Merenda, a so-called '700 and the other' 800. The substantial difference is in the hot drink that is served and in which the "wet" are soaked, in addition to the new chocolates created over time by the court pastry chefs.

The Royal Merenda of the '700 includes in fact a hot chocolate made according to the original recipe, with water and dark chocolate, served with traditional biscuits called "wet". Along with the latter, there were then the "diablottini" (the first chocolates in history) and the "nougat".

La Merenda Reale of the '800 was revolutionized by the arrival of a drink that became one of the symbols of Turin. We are talking about the "Bicerin", accompanied in this Merenda Reale by the traditional "Bagnati" ("wet") and other chocolates such as the legendary "cri-cri", "gianduiotti" and "nocciolini of Chivasso".

Today this delicious tradition relives every weekend in some historical cafés of the city of Turin and in some of the Royal Residences of Piedmont. And, in order to be sure to prepare a traditional royal snack, the confectioners and the barmen go to the school of Savoy bon ton by Barbara Ronchi della Rocca, an expert in the traditions of the House of Savoy.

Every week-end of the year, during the opening hours of the participating clubs. There is no reservation, so the Royal Merenda will be served according to availability of the coffee member. We invite you to contact the managers to find out the availability of the weekend of your choice.