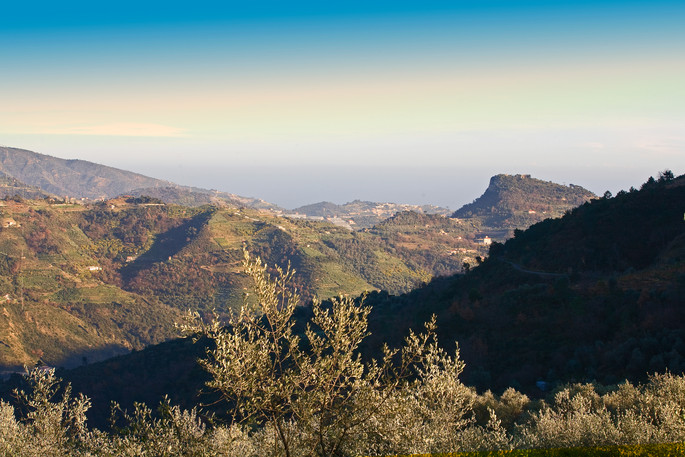 The Alta Via dei Monti Liguri is a scenic hilltop hiking route which runs along the main Ligurian mountains and hilltops from Ventimiglia, in the farmost western part of the region, all the way to the Tuscany border (or viceversa). As it covers over 400 kilometres, the route is quite fascinating and varies significantly; along the way, one comes across places of great natural interest and traces of farming tradition. The Alta Via offers unique, spectacular views reaching as far as Corsica when facing seawards or the Alps on the opposite side, where one can spot Mount Monviso and Monte Rosa.

Along the entire route, elements of the remarkable historical and cultural heritage can be found; the line of fortifications in the west or the several ancient rural settlements that border the ridge at different points of the trail are just a few examples. Each leg of the route can become an opportunity to visit a village, a castle, a museum, as well as to partake in a traditional festival and fair that, in all seasons of the year, animate the region. Furthermore, the route is of great significance from a natural perspective: along with the Sites of the European Union Natura 2000 Network, the park system and the regional ecological network, the Alta Via is a "connecting corridor" extremely important for the macrofauna.

The itinerary mainly follows wellmarked pathways and easy dirt trails; it is fully sign-posted with red-white-red markers, the letters AV being in the central white stripe. In addition, running the lenght of the Ligurian hillside range, the Alta Via is crossed by all the main routes and it can be joined or left whenever the visitor may choose. Following the Alta Via, one may opt for an itinerary taking several days or a walk lasting just a few hours.

The path is divided into 8 homogeneous geographical areas; here below the description of the first westernmost area: the Nervia Valley.

From Ventimiglia to the forest of Testa d'Alpe, by the sheer fossil falaises of Roverino, you will pass through olive groves and Rossese vineyards and then, further up, you will come across thyme and lavender bushes with their inebriating scent alternating with rare alpine flora. A veritable treasure chest of biodiversity, a naturalistic sanctuary where holm-oak, maple and beech mix with larch, spruces and fir trees and where chamois and wolves dwell along with with other typically mediterranean species such as the Jewelled Lizard. One of the most fascinating hikes is through the Sentiero degli Alpini, a rocky path hewn into the mountain, looking down over a precipice, which winds along the eastern slopes of Monte Pietravecchia (2.038 m) and Monte Toraggio (1.972 m). The path was constructed for military use in the late 1930s against French attack. Its arduous passes, the dry stone walls and the many tunnels make this a suitable trail for expert walkers.