From July to August 24th: a Fairy Summer Meeting. 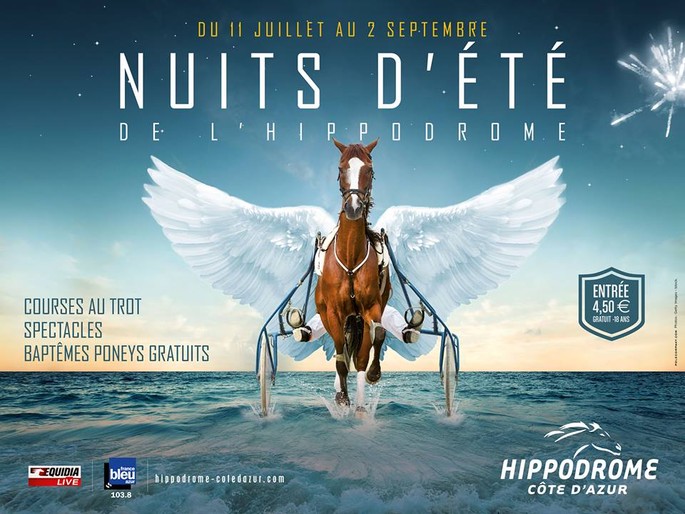 Take a seat, the show will begin! Athletes enter the runway under the spotlight. The start is given: the trotters rush. The sulkies brush against each other. The fight is intense. Two passages in front of the stands and it's the finish. Do you like the emotion of the game? With 20 meetings, including 16 at night, the Summer Meeting offers many opportunities to express your talents as racing tipster. Choose your favorites, check their quotes on the screen and play them, winners or placed.

At the racecourse, with friends or family, you win every time. The setting is superb: an oasis of greenery at the gates of the Big Blue. You can combine entertainment and gastronomy in one of the panoramic restaurants. Children are also at the party all summer long. On shopping evenings, they can fully enjoy free entertainment: inflatable structures, sulky bikes and ponies. In addition, beautiful fireworks are scheduled on August 24th.

This year, the Hippodrome of the Côte d'Azur and the National Museum of Sport offer you an unprecedented photo exhibition on the theme "Football, a century of passion for women" on the occasion of the 2019 FIFA Women's World Cup.

Join the Facebook contest and become the jockey of a night. Every Wednesday of August discover thrills on a sulky duet with a professional driver.

During the summer nights discover the different formulas "Live dinners" to associate gourmet moments and show shopping. At the Le Paddock brewery: unlimited buffet at 28 € * or menu (starter / main course / dessert) at 35 € ** during the fireworks evenings. At Le Pesage restaurant: menu at 35 € * and 49 € ** Reservations: pavillonhippodrome.fr * August 23rd. ** August 24th.

Wednesday 14th August: Children's pony race: The racecourse of the Côte d'Azur and the Ecurie des Veys organize the 3rd edition of the pony race dedicated to young riders.

Saturday 24th August: Closing Night - High Speed ​​Trotting - Palio of Friendship - World Summer Cup Junior: As every year for the closing of the summer season, the Hippodrome of the Côte d'Azur organizes an evening full of events :

• Final of the High Speed ​​Trotting Challenge: culmination of the Summer Meeting, this race pitches the best European sprinters over the mile distance.

• 7th Palio of Friendship: the Racing Society of the Côte d'Azur organizes its traditional Palio, an inter-city race that sees on the track meet several cities of the Riviera, Sweden and Italy in a festive and friendly atmosphere.

• World Summer Cup Junior: the best young drivers in the world compete in a pony race, stage of a challenge to reveal the future stars of the Trot. Free entertainment for children and fireworks in the late evening.

The Olt Defile is the longest and the most scenic...