Lady’s kisses are so called because their shape reminds of two lips in the act of kissing. 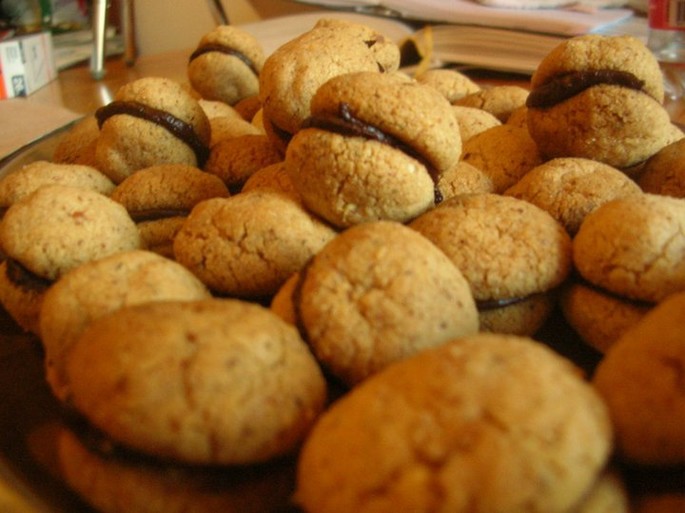 Baci di dama, literally lady’s kisses, are delicious little treats originated a century ago in the Piedmontese city of Tortona, province of Turin.

They are made of two butter and almond biscuits united through a thin layer of dark chocolate.

Their name is due to the shape of this little dessert, which reminds of two lips in the act of kissing.

Baci di dama were first prepared in the eighteen century, using Piedmontese hazelnuts, which were more easily available in the region than almonds. But in the latest years of the first decade of 1800, Cavaliere Stefano Vercesi modified the recipe, creating baci Dorati, golden kisses.

In 1906, at the Milan international fair, Baci Dorati were awarded the golden metal, the most prestigious honour at the time.

A more romantic legend tells that Baci di Dama were created in 1852 by a chef working for the Savoia family, at the request of Vittorio Emanuele II, who wanted to try a new dessert. Baci di Dama were so successful in the Savoia court that they soon became a common treat in all Italian and European courts.

Today, different versions of Baci di Dama exist. The most popular of them is the recipe from the city of Alassio, in the Ligurian region: the distinctive trait of Baci di Alassio is that they are made adding cocoa and honey to the biscuit dough. Baci di Alassio became so in demand that their creator, Pasquale Balzola, patented the recipe in 1919.

Here is our the classic recipe for delicious Baci di Dama, using almonds and dark chocolate.

the zest of 1 orange

In a bowl, put the butter cut in pieces, the flour and the blended almonds and combine using your hands.

Add the orange zest, the vanilla essence and the pinch of salt. Knead the dough, then wrap it in kitchen film and let it rest in the fridge for at least an hour.

After this waiting time, divide the dough into sticks, from which you will cut small portions of about 6-8 grams. Use these portions to form little balls.

Put the dough balls in an oven tray, covered in baking paper, and put them back in the fridge for an additional 30 minutes.

Bake the dough balls in static oven at 160 °C for about 20 minutes, or until the biscuits are golden. If you would rather use ventilated oven, bake at 135 °C.

In the meantime, melt the chocolate in bain-marie or in the microwave. When the biscuits are ready and the chocolate has cooled, spread some chocolate on the flat side of a biscuit, then cover carefully with another biscuit.

Leave the biscuits on a tray, until the chocolate has completely cooled down, then serve.

Baci di Dama can be ideally matched with Alta Langa Spumante Rosato, served cool at a temperature of about 9 °C, or with Monteferrato Chiaretto.