#Recipe of the week: #Grissini

Grissini, or breadsticks, are one of the most iconic examples of Italian and Piedmontese cuisine abroad. 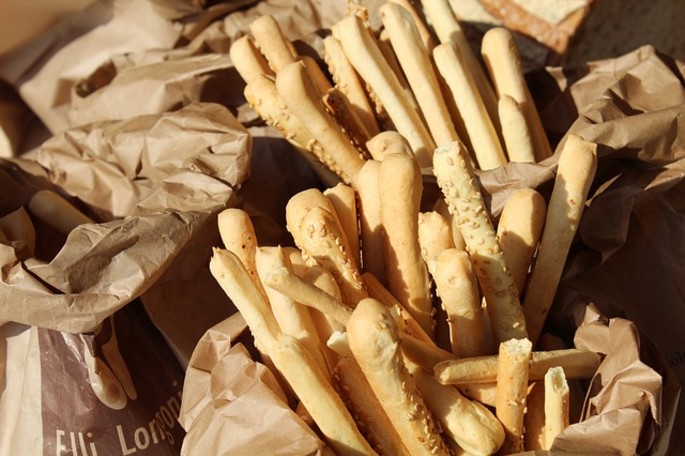 Their name derives from the Piedmontese word ghërsa, used to indicate the typical long-shaped bread of the region.

According to the tradition, grissini were invented in 1679, when the Court baker Antonio Brunero invented this product at request of the Savoia duke’s doctor, for the future king Vittorio Amedeo II, who was not able to digest common bread due to his weak health and bad intestine.

King Carlo Felice loved grissini so much, that he used to eat them as a snack at the Teatro Regio.

Grissini became soon very popular, both because they are more easy to digest than common bread and because they can be conserved for many weeks without getting stale.

The most ancient and traditional kind of grissini is called robatà, which in Piedmontese means ‘fallen’. The length of robatà varies from 40 to 80 cm. They are traditionally hand-made.

Also popular are the grissini stirati, yet another kind of grissini well known in Italy. While the robatà are formed by rolling the dough, grissini stirati are made by pulling the two ends of a dough stripe.

Here is our suggested recipe for authentic home-made grissini: this version is for grissini stirati.

Melt the brewer’s yeast and the malt in some of the water, lukewarm.

In another bowl, pour the remaining water and add the salt to melt. Then add the oil.

Sift the flour and mix it with the water, yeast and malt mixture. Add the oil mixture while always mixing.

Knead until you get a dough. Put the dough on a surface covered with soft wheat flour and knead it to form a flat rectangular shape.

Cover the dough with extra-virgin olive oil and add some more soft wheat flour on top.

Let the dough rise until it has doubled its initial proportions (it takes about 1 hour).

After waiting enough time, with a smooth and long knife cut the dough at the shorter side to obtain stripes of about 1 cm.

Hold each stripe at the two ends and pull them until they become of the length of the oven tray.

Put the grissini at a fair distance in an oven tray covered with baking paper, and bake at 200 °C for about 20minutes, or until golden.

Don’t worry if your grissini are not even. They don’t have to be!

For a delicious alternative, add some extra-virgin olive oil to your grissini and sprinkle them with poppy or sesame seeds before cooking them in oven.