Medieval vestiges remain in the stark church, which is open to the public, and in the ruins of the 11th-century monastery. The monks divide their time between prayer and producing red and white wines, honey, lavender oil and Lérina, a herbal liqueur. Although closed to the general public, the monastery welcomes guests for week-long retreats. 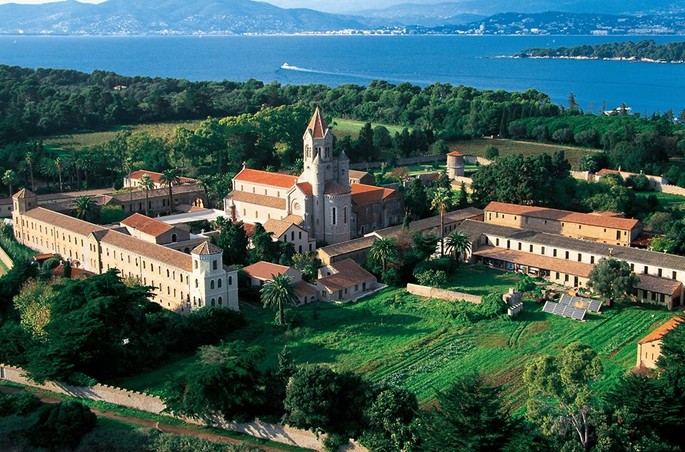 As Honorat just arrived on the island, deserted by its inhabitants and returned to the wild, because of the terrible earthquake , the future saint had to face an invasion of reptiles. This upsurge of snakes and scorpions, although inoffensive, is very harmful to the creation of his monastery; so he must purge the island of the threat. Raising his hand on those extra guests, Honorat reduced them to the state of rotting corpses. To get rid of it, he raised his six companions at the top of a palm tree and ordered the waves to seize the island; washed with water, Lero is ready to welcome the monastic life. It is in memory of the miracle that the arms of the abbey of Lérins are composed of an abbatial staff flanked by two serpents entwining with their tails a  palm.

But the future abbey suffers, like the Romans of Lerina, the disappearance of water resources on the island. Honorat performed one last miracle to quench the thirst of his companions, by planting a stick in the ground and sending up an inexhaustible source from the soil; it is the Saint-Honorat well today with a pump and a wind turbine, and which allowed the survival of the monastery over the centuries.

The Monastery of Saint-Honorat

The monastery is founded around 410 (or about 400, according to Jacques Biarne) by the hermit Honorat. Its expansion is rapid, and the disciples flock from across Europe to retirement at Honorat's, as pilgrims, who receive the same indulgences as for a trip to the Holy Land. They go barefoot around the island, stopping at each of the seven chapels devices; we see a Pope, visiting Lerins, humbly follow this ancient tradition. Devotees from France and Italy ask to be buried there.

Lérins islands are recovering rapidly, following the disaster that caused the fall of the Roman city, and trade shows on each of the two islands. The monks, who own the entire island, cultivate their territory, harvest lavender and honey, will manufacture and even make a liqueur from forty-four plants, local and foreign to the archipelago, the Lérina.

In 427, the abbey became a "huge monastery,"; composed of two superimposed cloisters, a chapter room, a warming room, kitchens, dormitories, cells, a scriptorium, a suite reserved for the priest, and three chapels, one could say it involved eighty rooms and more than a hundred doors. Besides its outstanding architectural interest, the Monastery of Lérins radiates throughout Europe by the impressive number of abbots and bishops he formed throughout its existence. Nicknamed "nursery of bishops" because he has trained a large number in the fifth and sixth centuries, the future Saint Patrick, evangelist of Ireland or Eucherius Lyon; it is the very first monastery founded in the West .

Monastic life is first regulated by the Rule of the Four Fathers, written by Saint Honorat himself to the founding of the abbey. It will be replaced at the end of the seventh century by the Benedictine Rule, which afterwards led to the assassination of Saint-Aygulf in 660, when he tried to introduce it to the Lérins, and will allow the monastery to receive important donations thanks to which it may swarm in Provence, where he founded a hundred convents.

Apart from one small restaurant near the landing stage, there are no bars, hotels or cars: just vines, lavender, herbs and olive trees mingled with wild poppies and daisies, and pine and eucalyptus trees shading the paths beside the white rock shore mixing with the scents of rosemary, thyme and wild honeysuckle.

A shop sells the benevolent white wine, spirits and honey produced by the 28 Cistercian brothers of the monastic community.

Marine biodiversity (Biodiversity Project Lérins)
The archipelago is home to a variety of typical ecosystems of the north-western Mediterranean. Its unique location in the heart of a densely populated coast, makes it a sensitive case we must understand and protect. Classified Natura 2000 area, its fauna and flora is exposed to the public in the Méditerranoscope on Île Sainte Marguerite, it is studied by the project Lérins Biodiversity (Skema Bachelors students of Marine Sciences) and numerous scientific mediation activities are organized by EIPC of the Lérins Islands and Country d'Azur.

The coastal seabed is "equipped with large sets of beds on rocks, witnesses of the quality of environment, and various other remarkable marine habitats (coralligenous, underwater caves, etc.)" (National Inventory of Natural Heritage). These herbariums, mainly Posidonia, are home to many species of fish and invertebrates. According to a survey conducted in autumn 2013 by Lérins Biodiversity, the most extensively observed fish along the coast are silversides, the salemas and wrasse (sea bream and wrasse). The visible wildlife is also of sars (common and black head), combers (writing, goat), echinoderms (black sea urchins, rocks, sea cucumbers), cnidarians (sea tomato, green anemone, jellyfish ...) and molluscs (octopus, mussels, pen shells ...). The actual biodiversity is obviously much more important because it consists of many species, smaller, deeper, more hidden, that one discovers by taking the time to dive at the islands.

Fort Royal on Sainte Marguérite is classified as historical monument by order of 27 July 1927 and the island is a protected area classified by decree of 17 March 1930.

The fortified monastery of the Abbey of Lérins on Saint-Honorat  island, is the subject of a classification as historical monument by the list of 1840.

Saint-Honorat Island's ball ovens are classified by MH Decree of October 22, 1908. The island is also a protected heritage site decree of September 17, 1941.

Unique private ownership of Sainte-Marguerite, is a botanical garden of 13,750 sqm cultivated for centuries. His name can not be changed. This park is located south of the island, in its most protected and the most fertile part, facing the Saint-Honorat island. There are cypresses, cedars of Lebanon, palm trees, many fruit trees: banana, lemon, orange, grapefruit, fig, almond, olive trees and thousands of flowers: geraniums, roses, exotic plants, and a large collection iris.

The property has three buildings, whose construction dates are controversial: the governor's house, where the owner is installed; sharecroppers home for his family, and remarkable square tower, reserved for distinguished guests, covered with a panoramic roof terrace.

The area is protected by a wall built on the orders of Cardinal Richelieu. The buildings have been built between the twelfth century and the seventeenth century and the area was home to famous owners, Lérins monks, the King of France, Louis XIV, the duke or governor of Provence; but also the mayor of Marseille, after the Revolution ...

More recently, in 1840 the property belonged to Jean-François Tournaire from Cannes, in 1889 to Paul Jubelin, Navy doctor then Felix Sue, patron of Rocheville lime kilns. This last occupant has sold in 1928 to the Danish sculptor Viggo Jarl who remained owner until the sale of the domain, for 5 MF in 1982 to Cannes promoter, Claude Muller, who sold this place, in 2008 for € 38 million, to Vijay Mallya, Indian industrialist.

Exists on the island since the establishment of the Romans on the island in the year -122. The shipyard of the Esterel, formerly based in the district of La Bocca in Cannes, took over the facility, becoming the only site capable of handling yachts of 50 m between Italy and La Seyne-sur-Mer. Since its installation, it is subject to judicial proceedings from environmentalists claiming its closure.

containing mostly Roman local finds but also remnants of a tenth-century Arab ship. Access is free to the grassy ramparts of this vast construction.

Lerins Cell of the Man with the mask, credit Bot Magnus Manske