A proposal, which is inspired by an important contemporary art venue in New York, which became, between 1962 and 1964, a place of artistic experimentation that marked the New York avant-garde of the 60s. 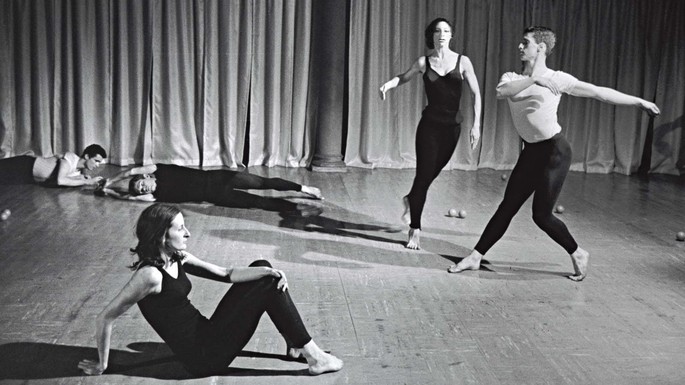 Experiments in music, dance and art come together to create great innovations in the field of contemporary dance and in art history. This exhibition allows you to know the genesis of the place and the actions that have been created, through photographs, interviews and texts that will document the "show-events" that took place there.

In the 1960s, the Judson Memorial Church (on Washington Square in New York) became a primary center of radical artistic experimentation and a major space for the presentation of performances by many artists involved in the downtown New York scene, who would interweave visual art, music, poetry, theater, and dance. Prior to this, beginning in 1959, the Judson Gallery had been founded to provide studios and a space for exhibitions, happenings, and performances by artists such as Jim Dine, Allan Kaprow, Allison Knowles, Claes Oldenburg, Tom Wesselmann, and even Daniel Spoerri. Furthermore, in 1962, protestant minister Al Carmines offered the sanctuary of the church to a group of dancers—Trisha Brown, Lucinda Childs, Ruth Emerson, Deborah Hay, Steve Paxton, Yvonne Rainer, Elaine Summers, among others—to present their final course work from a pivotal choreography class taught by composer Robert Dunn. From this date onwards, the collective, that would be called the Judson Dance Theater, would introduce radically new methodologies for composition and dance practice, understood today as primary foundations for minimal, intermedia, and performance art to come.

Some of the students in the Dunn class, such as Simone Forti, had brought the influence of West Coast choreographer Anna Halprin, who led a seminal workshop in Kentfield, California on her outdoor Dance Deck beginning in 1954. She privileged improvising with the body through simple “tasks” such as crawling and sitting, instead of formal technique, and welcomed analysis of the natural environment around them. In the summer of 1960 Forti invited some artists such as Rainer and Robert Morris, to take Halprin’s workshop, where they first encountered the compositions and lectures of the composer La Monte Young. However, many in the central group of dancers who would form the scene at the Judson church first came together in Dunn’s class, held in the studio of Merce Cunningham, then the primary model for Modern dance. Dunn instructed the students to choreograph using chance methods, experiment with indeterminacy (following John Cage), and perhaps most consequentially, to compose movement with task-based instructions and graphic or textual scores.

On July 6, 1962, after the second year of the course, the Judson dancers presented “Concert of Dance # 1” at the church, the first in a series of sixteen concerts over the next two years. Joined by composers, filmmakers, visual artists, and poets, the collective refused dominant paradigms of Modern dance dictated by the work of those such as Cunningham and Martha Graham. More importantly, the interdisciplinary laboratory they constructed through their weekly workshops, with all decisions regarding the concerts reached by consensus, opened the way to experimenting with numerous aesthetic, theoretical, and practical concerns: such as eliminating narrative from dance; analyzing the relations between performing bodies in space and time to the spectator; and embracing everyday movement and objects. By the end of 1963, however, some Judson dancers began to stage evening-length concerts, developing individual styles and methods distinct from the group.

When Jon Hendricks, activist, artist and co-founder of the Guerilla Art Action Group, reopened the gallery in 1966, it emerged once again as a central site for radicalism, artistic experimentation, and interdisciplinary collaboration. In 1968, he organized the exhibition 12 Evenings of Manipulations, which Jud Yalkut documented in an experimental video work. Elaine Summers’ earlier Judson Fragments (1964) which recycles footage from Judson Dance concerts splices it together using chance methods with other footage, including James Waring teaching a choreography class. Hendricks continued to invite many local and international artists to exhibit work in the space, including Bernar Venet, who realized a series of performances including Relativity's Track in 1968. The site’s cultural activism culminated with the exhibition The People’s Flag Show (1970). Organized by Hendricks, Faith Ringgold, and Jean Toche, all arrested for “desecrating the flag,” the exhibition became a flash point in artists’ campaigns in defense of free speech during the escalating opposition to the Vietnam War, and the continued development of anti-racist, anti-colonial, feminist, and queer activism.

Inventing Dance: In and Around Judson Church, New York 1959–1970 prominently considers the work of those most vital figures for the Judson Dance Theater. However, the exhibition in the MAMAC also documents the many others who produced or performed in work presented at the church in this long decade. The exhibition offers a glimpse into “Judson,” and all it signifies, which remains, even today, a major source of influence for choreographers, dancers, artists, and other cultural producers. Through documents, films, archival photographs, and exhibition ephemera, it attempts to summarize the movement of bodies at the Judson. However, the question remains: how to exhibit work, much of it improvised and specific to its original performance, six decades later.

Allen Hughes, dance critic for the New York Times, concluded his review of “Concert of Dance #1" in the following way: “The chances are, however, that their experiments will influence dance development in this country somehow, and because this seems likely, they are worth watching.” Looking back now, the simultaneous awe and tepid incomprehension encapsulated by Hughes’ sentence stress the radical “newness” and difficult nature of the work produced during this period, and underline the far-reaching influence of the dancers’ experiments. After all, as per Rainer’s oft-cited quip, even walking and running were never the same again.