#Seborga, a small town in the region of Liguria in northwest Italy, claims its independence from Italy as the sovereign Principality of Seborga. [VIDEO-PHOTO GALLERY]

Seborga (Seborca ​​in Ligurian) is an Italian town of the province Imperia in Liguria, near the French border,it has been awarded, since 2009, the Orange Flag by the Italian Touring Club. 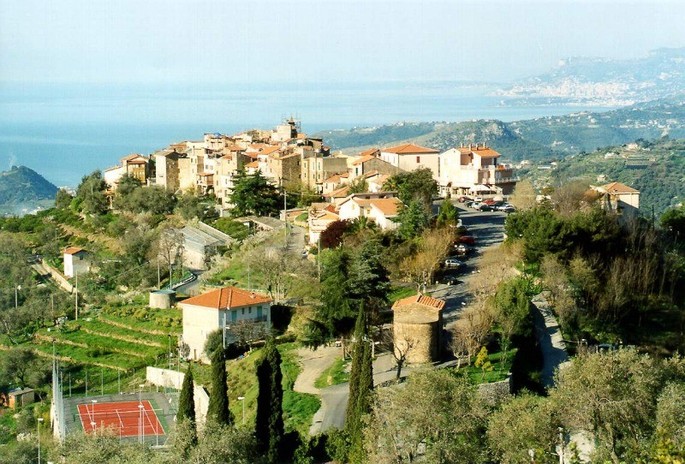 The small town of Seborga, with 320 inhabitants, is located inland between Ospedaletti and Bordighera and is about 46 km from the capital. From mild climate with cool summers and mild winters, Seborga is ideally located, always sunny and with large mountains behind which it is protected from cold northern winds.

There is a copy of a document dated 954, in which a marquis Guido, Imperial Count of Ventimiglia, departing for Spain, to bring help to King Alfonso (in subsidium illustris D.ni Ildefonsi, regis Hispanie), which fights against perfidos saracenos, would donate the properties located in Seborga to the Benedictine monks of the abbey of Lérins. The document also cited a "Louis, emperor of the Romans", Thomas, comite Sabaudie (and fratre uxoris mee) and Raimondo, marchione Montisferrati or characters and titles, which  did not exist in the year 954 ..

However, a donation of Seborga to Lerino , by a Count Guido of Ventimiglia, not dated in 954, seems to be valid during a process dating back to 1177, preserved in authentic copy of the year 1305. In fact, in the second half of the twelfth century the town of Ventimiglia claims that Seborga becomes part of its territory. Then began a lawsuit with the abbot of Lerins and July 13 1177 the sentence was rendered by the bishop of Ventimiglia and Ventimiglia consuls who recognized the legacy of Count Guido, according to the act of donation (quod for privelugium bullatum bulla dicti comitis comprobabat) and the testimony of twelve local elders. The majority of academic historians admit the authenticity of the act in 1177 but there are influential authors that put into question the act in 1177 considering it a fake of the year 1305.

In 1181 the Republic of Genoa, which had extended its domains up to Nice claimed to take the protection of the islands of Lerins and therefore also of Seborga; in reality, Seborga continued to depend politically and administratively from the County of Provence. This situation remained unchanged until the eighteenth century, however centuries marked by constant bickering about the extent of the borders of Seborga.

In 1666, on Christmas Eve, Abbot Cesare Bacillon outsources Bernardino Bareste a brand for a period of five years after a payment of 740 pounds a year. There are imitations of petit louis coined from 1667 to 1671. The coins bore straight side the bust of St. Benedict and the reverse the coat of arms, still in use. The circulation of these coins was prohibited by the King of Sardinia in 1667 and the coins themselves were stigmatized as fraudulent by the Bishop of Nice in 1672. There are known other contracts of the mint in 1679 and in 1684, but are not known products of these contracts afterwards.

In 1697 Vittorio Amedeo II of Savoy is about to buy the territory of Seborga but the opposition of the Genoese who pressured the Pope Innocent XII makes that the sale is perfected only thirty years later (January 31, 1729).

Seborga became first, with the Liguria, in 1815 part of the Kingdom of Sardinia, of the Kingdom of Italy and the Italian Republic then. From 1973 to April 30, 2011 it was part of the Mountain Community Intemelia latter suppressed by the Regional Law n ° 23 of December 29 2010 and in force since 1 May 2011.

The alleged independence of Seborga

Since the fifties of the XX century some members of the community of Seborga have claimed independence from the Italian Republic, by virtue of an alleged ancient principality status, formerly enjoyed by the locality, deeming invalid the annexation to the kingdom of Sardinia.

The citizens of Seborga therefore elect a leader with purely symbolic functions: the role was played from May 14 1963 until November 25 2009, the date of his death, by Giorgio Carbone (George I), and from April 25 2010 by Marcello Menegatto (Marcello). The Prince is assisted by a council of nine ministers, with no legal power.

The principality mints a coin, called Luigino (name inspired by that of the coins minted in the seventeenth century), without any legal value, but used as a voucher redeemable in the city; This gave rise to some interest in the world of numismatic collecting. The value given to the so-called luigino is set at US $ 6.

Seborga also has its own "license plates" which, however, can not be used except a latere of the Italian. There are then distributed to the applicants" passports "and" driving licenses "and stamps bearing the effigy of the principality that are only for folk and tourism promotion.

The supposed independence of the principality would be, according to many, just a publicity stunt to attract tourists and investors.

The principality of Seborga is not recognized by Italy, which has de jure and de facto the real jurisdiction over the area.

The coat of arms was approved with the decree of the President of the Republic dated February 9 1994.

In addition to economy as a tourist destination, Seborga is known for its agricultural activity: in particular, the growing and harvesting of the olives and the flower production.

Thanks to Seborga's publicity as a principality, tourism has expanded in recent years. The principality's historic town centre was also restored, ensuring that its charms were protected from commercial overdevelopment.

Monuments and places of interest

. Museum of the mint.

. Feast of the Principality.

Seborga is situated along the provincial road 57. The highway exit of Bordighera on the A10 is the one close to it.

Seborga Coat of Arms of the Principality