The museum houses a collection of art spanning the past four centuries. There are, among others, paintings by artists who lived and worked on the French Riviera. 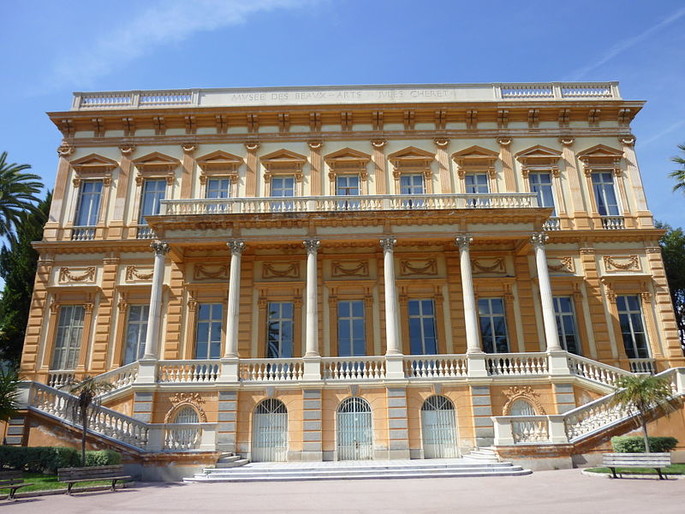 The Musée des Beaux-Arts de Nice  is located in an old Russian palace built in 1878 by the Ukrainian Princess, Elisabeth Vassilievna Kotschoubey. Named after the artist Jules Chéret who lived and worked in Nice during his final years, the museum opened as the "Palais des Arts Jules Chéret" on 7 January 1928

This large house inspired by Genoese palaces of the seventeenth century was a fully fledged work of art. It's a real treat to relax in the adjoining park, while observing the architectural work of great value. But what a collection in this beautiful setting!. This evolves on two levels and is mainly composed of works donated by Napoleon III to the first Museum of Fine Arts in Nice.

On the ground floor, three rooms to the left of the entrance, house the works of the seventeenth, eighteenth and nineteenth centuries. We note in particular the collection entitled "Dynasty Van Loo," particularly rich and varied. Van Loo was a dynasty of painters, the best known, Carle, was the first painter of the king. Among the works of this dynasty (monumental paintings of surprising modernity), admire the fantastic "Theseus, winner of the Marathon bull" or "Neptune and Amymone" by Carle Van Loo.

The corridor along the three rooms, for its part, is devoted to Impressionism and Post-Impressionism. Works by Vuillard or Trouillebert are exposed but it is not the most interesting part of the museum. It is advisable to focus on the patio in which beautiful statues are enthroned. You can, among others, admire the "Marie Bashkirtseff" by Michel de Tarnowsky 1914 or "The Triumph of Flora" by Jean-Baptiste Carpeaux 1873.

After the grand staircase, 1st floor, is devoted to the twentieth and to the period at the end of the nineteenth century. Less interesting than the first section, it contains still some sights that would be a shame not to explore. Of these, a large place is given to Jules Cheret, the famous poster inventor, died in Nice in 1932.

There are also paintings by Gustav-Adolf Mossa, who for many years was curator of the museum. The small museum has sculptures by Jean-Baptiste Carpeaux, François Rude, Michel de Tarnowsky and Auguste Rodin, moreover ceramic pieces by Pablo Picasso. Some of the paintings are from:

Price : €10
Also accessible with this ticket for 48hrs : Musée d'Art Naïf
7-day ticket : €20
Access to all municipal museums and galleries for 7 days

We would also like to remind you that the French Riviera Pass (24hrs, 48hrs or 72hrs) includes free access and guided tours in all municipal museums and other emblematic places of interest during its period of validity.
Opening times : 10:00-18:00.
Weekly closing : Monday
Temporarily closed : 01/01, Easter, 01/05, 25/12

[EDITOR'S NOTE:Some of Dufy's Paintings in our gallery don't belong to the collection of this musem]